The Limpopo Province (State) is renowned for its hot, yet pleasant summers and dry winters. The province’s weather is characterised by almost year round sunshine. 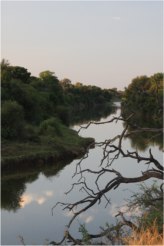 Hunting in South Africa runs year round with the main hunting season from middle April till middle September.
The Limpopo province gets summer rainfall, so there are basically two ways to determine when the best time for your Safari will be.

•  Middle April – end June, the bush (brush) is thick, with a lot of foliage, which makes it difficult to see. The animals have not been shot at that much, and are relatively calm.

•  July – September, the foliage is down, which makes visibility much better. It is very dry during this time of the year, forcing the animals to visit the waterholes more often, and travel greater distances for grazing.

•  The Limpopo province has very hot summers and mild winters.

•  Hunting from March – April, and September – October, you can expect mid day temperatures around the 30 degrees Celsius (85 degrees Fahrenheit). The early morning and late afternoons can be chilly.

There is a six to nine hour time difference from SA to the USA. (Summer time USA).