You may wish to extend your stay by adding additional trips prior to or after your Safari. Please inform Jaco regarding your plans, and he will send you a quotation for your specific photographic safari.
Here are a few of the favorite trips our clients often choose. You can determine your own trip, should you have something else in mind.

Kruger National Park is one of the largest game reserves in Africa. It covers 18,989 square kilometres (7,332 sq mi) and extends 350 kilometres (220 mi) from north to south and 60 kilometres (37 mi) from east to west. The park is part of the Kruger to Canyons Biosphere, an area designated by the United Nations Education and Scientific Organisation (UNESCO) as an International Man and Biosphere Reserve (the "Biosphere").

Chobe National Park, in northwest Botswana, has one of the largest game concentration in Africa continent. By size, this is the third largest park of the country, after the Central Kalahari Game Reserve and the Gemsbok National Park, and is the most diverse. This is also the country's first national park. 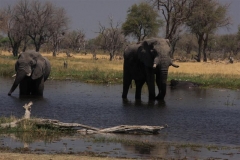 The Okavango Delta , in Botswana, is the world's largest inland delta. It is formed where the Okavango River empties onto a swamp in an endorheic basin in the Kalahari Desert, where most of the water is lost to evaporation and transpiration instead of draining into the sea. The Moremi Game Reserve, a National Park, spreads across the eastern side of the delta.

Located on the shore of Table Bay, Cape Town was originally developed by the Dutch East India Company as a supply station for Dutch ships sailing to Eastern Africa, India, and the Far East. Jan van Riebeeck's arrival on 6 April 1652 established the first permanent European settlement in South Africa. Cape Town quickly outgrew its original purpose as the first European outpost at the Castle of Good Hope, becoming the economic and cultural hub of the Cape Colony. Until the Gold Rush and the development of Johannesburg, Cape Town was the largest city in South Africa 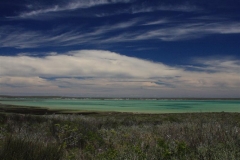 The West Coast is a region of the Western Cape Province in South Africa and is bordered by the Atlantic Ocean on the west and the Swartland region on the east. The region stretches for over 400 km from north to south and is well-known for its scenic beauty and fertile fishing grounds. 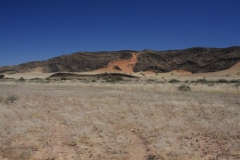 The Republic of Namibia is a country in Southern Africa, whose western border is the Atlantic Ocean. It shares land borders with Angola and Zambia to the north, Botswana and Zimbabwe to the east, and South Africa to the south and east. 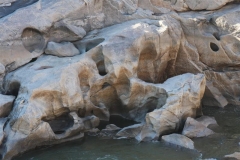 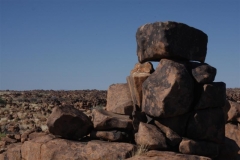 Giants Playground boasts a remarkable example of the tremendous powers which shaped the earth aeons ago: blocks of greyish-black dolerite are stacked upon one another as if giants have been playing with bricks. The grounds can be regarded as a sculpture garden which can be viewed from a circular route. 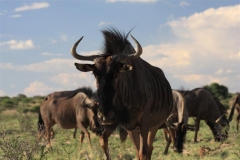 Kgalagadi Transfrontier Park is a large wildlife preserve and conservation area in southern Africa. The park straddles the border between South Africa and Botswana and comprises two adjoining national parks: Kalahari Gemsbok National Park in South Africa and Gemsbok National Park in Botswana. The total area of the park is 38,000 square kilometres (15,000 sq mi). Approximately three-quarters of the park lies in Botswana and one-quarter in South Africa 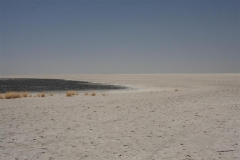 The Makgadikgadi Pan is a large salt pan in the middle of the dry savanna of north-eastern Botswana, it is one of the largest salt flats in the world. 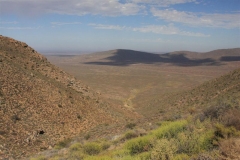 The Northern Cape is the largest and most sparsely populated of the provinces of South Africa, created in 1994 when the Cape Province was split up. It includes the Kalahari Gemsbok National Park, which is part of a trans-frontier park with Botswana. It also includes the Augrabies Falls and the diamond mining regions in Kimberley and Alexander Bay. The Namaqualand region is famous for its Namaqualand daisies.

The quiver tree or "Kokerboom" is indigenous to the hot and dry southern part of Namibia. The plants are succulents and can reach a height of up to 9 metres in height. They have adapted to the extreme environmental conditions by storing water in their trunks. The tree only blossoms for the first time after 20 to 30 years and can reach 300 years of age. 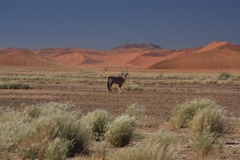 Sossusvlei is a clay pan in the central Namib Desert, lying within the Namib-Naukluft National Park, Namibia. Fed by the Tsauchab River, it is known for the high, red sand dunes which surround it forming a major sand sea. Vegetation, such as the camelthorn tree, is watered by infrequent floods of the Tsauchab River, which slowly soak into the underlying clay. 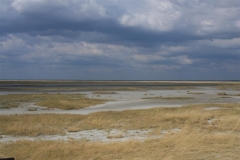 The Bushman word for salt is "Sowa" - an apt description of the vast white expanse of the largest natural Salt Pans in the world. During the rainy season the Nata River carries water into Sowa Pan filling the northern part of the pan and attracting an array of waterbirds including flamingos, pelicans, ducks and teals. 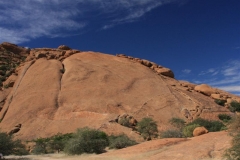 The Spitzkoppe is a group of bald granite peaks or bornhardts located between Usakos and Swakopmund in the Namib desert. The granite is more than 700 million years old and the highest outcrop rises about 1784 meters (5857 feet) above sea level. The peaks stand out dramatically from the flat surrounding plains. The highest peak is about 700m above the floor of the desert below.